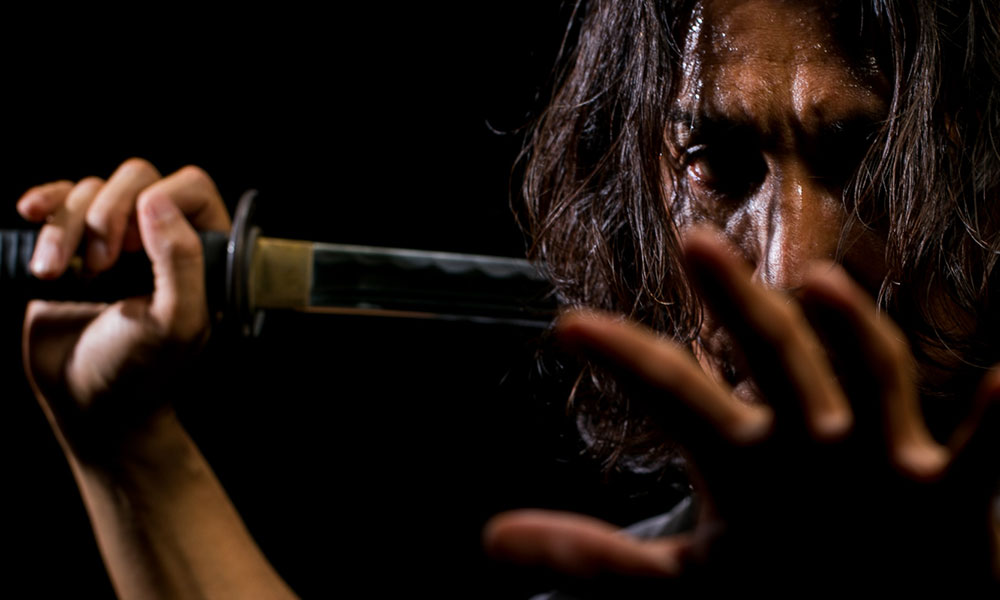 It is not often that we get to work directly with koryu practitioners, but recently we had a marvellous opportunity to collaborate with one of Japan’s most outgoing and energetic shihan – Hyoho Taisha-ryu’s Yamamoto Takahiro.

As part of the exciting Saburau Exposition that visited italy recently, we worked alongside Yamamoto Shihan to design and bring to life a Sengoku-jidai era Higo Koshirae Iaito, based off of Taisha-ryu’s records. In this article we explore the unique elements of this Iaito and where they are derived from.

Characteristics of a Higo Koshirae

Higo Koshirae are named after the province of Higo, which is now an area of Kumomoto Prefecture on Japan’s Southern island of Kyushu. The swords originating here, used by the various clans that ruled over Higo Province through the Sengoku-jidai, were renowned for their practical efficacy on the deadly battlefields in that era.

Particular elements found in Higo Koshirae include the rounded tsuka-kashira and karakusa scrollwork patterns on the kanagu. However there is still quite a lot of variance in terms of styles and themes. Below you can see the koshirae designed by Yamamoto Takahiro us, note the rounded kashira.

When we began designing this sword alongside Yamamoto Shihan, of great concern was the era that sword was originating from. The Sengoku-jidai was a time of brutal civil war in which Samurai fought each other in mass battles and skirmishes across the country. As such, their equipment and martial arts had to accomodate for this chaotic and militaristic environment.

Taisha-ryu itself is a koryu kenjutsu that came about in this period. The needs of the time are reflected in its techniques and kamae. So when it came to this koshirae, Yamamoto Shihan was eager to emphasise some of the more unique features present in swords from the Sengoku-jidai. One of the most distinctive features is the lacquered tsuka-ito. These are suede leather bindings that have been hand-laquered in Japanese urushi. They provide an incredibly tactile surface that does not slip easily, even when covnered in sweat or blood, a grim necessity for a battlefield warrior. Furthermore, this layer of lacquer added extra durability to the tsuka minimising unfortunate incidents where a warrior’s weapon would be rendered unusable by an ill-fated blow to the tsuka.

Another fascinating feature of this Taisha-ryu Higo Koshirae, is that the saya can be fitted with what is called a kaeri-tsuno. This is a small lacquered hook on the saya that points towards the tsuba. When you thrust your sword between your obi, this hook slids through and can then catch the obi when pulled back out. This provides a really secure fit for the sword within your obi, preventing it from falling away from you or being pulled out whilst you struggled in a close quarters melee. It also allows you to draw the blade single-handedly without using your other hand to draw back the saya.

In modern iaido practice this is likely to be inconvenient as the saya is regularly inserted into and taken from the obi during practice.

Originating from the renowned swordsman Marume Kurando, a retainer of the Sagara clan in the mid to late 1500s, Hyoho Taisha-ryu was brought about in an era where Japan was plagued by civil war. As such, it is a very practical style of kenjutsu with very deep stances and movements; designed to deal with the uneven terrain of the battlefield.

Because of Taisha-ryu’s birthplace being what would become Higo Province, it is no wonder that Higo style koshirae were favoured by practitioners of this ryu-ha. To link this koshirae directly to Taisha-ryu, Yamamoto Shihan chose the style’s emblem – the Kuyomon – as the menuki. The Kuyomon represents nine celestial bodies that possess a strong symbolism within Buddhism, often associated with fate.

Yamamoto Takahiro Shihan shares his thoughts on the design of this Premium Higo Koto Koshirae.

I wished for this koshirae to be based on the original style of higo koshirae as well as informed by the records of Taisha-ryu.

For example, the tsuka is thoroughly reinforced. In an era where you had fierce battles, the tsuka was one of the most important parts of the sword. Damage to your tsuka would immediately prove to be fatal. Because of this, this koshirae’s tsuka is first wrapped in fine ray-skin which is then subsequently reinforced with red lacquer. Furthermore, it is then wrapped in durable black leather that is once again lacquered with a translucent urushi. All this results in a tough finish that you could use in a real battle.

This is the “beauty of practicality”. Take the saya for example; even here you can appreciate the practical applications, from the reinforced koiguchi, kurigata and the kaeri-tsuno that makes it possible to draw your sword with one hand. The saya’s length is reinforced with a tough finish of kanshitsu style lacquer.

The blade utilises an extremely simple and threadlike suguha, its single groove laquered in red for a practical, yet still beautiful finish.

I too have used this koshirae in embu. I think that because the skillful craftsmen at Tozando conciously kept the “beauty of practicality” in mind whilst devising this sword, the balance and ease of use is really quite good, though this is a subjective opinion.
However, for those who want to use this in Iaido, the kaeri-tsuno will make it difficult to remove the saya from your obi. I would instead recommend having this koshirae made without the kaeri-tsuno.
Finally I would like to express my deepest gratitudes to the staff and artisans at Tozando who supported and helped the Saburau project.

So there you have it, the Premium Higo Koto Koshirae designed by Taisha-ryu’s Yamamoto Takahiro Shihan in collaboration with Tozando’s craftsmen, for the Saburau Exposition. Join us in the future for mroe articles on particular works where we will explore historical, cultural and practical influences on their craftsmanship!